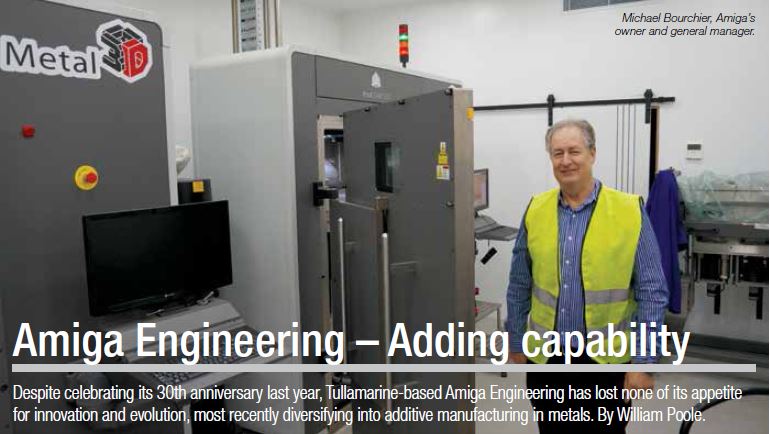 Despite celebrating its 30th anniversary last year, Tullamarine-based Amiga Engineering has lost none of its appetite for innovation and evolution, most recently diversifying into additive manufacturing in metals. By William Poole.

Amiga was founded in 1988 by two brothers, Michael and Dale Bourchier. Industry veterans, they had experience working across a broad range of manufacturing segments, from car parts suppliers to German toolmakers. However, they’d reached a turning point when the business they were working in started struggling. “We were basically redundant,” says Michael, who remains Amiga’s owner and General Manager to this day. “So I said ‘Let’s start up our own business’. So off we went.” The company set up operations in a tiny factory in East Keilor, Melbourne. The brothers got some help from their dad just to get the workshop wired up, and it took time and persuasion to have a phone line installed. With nothing more than a $10,000 overdraft, they had to shop around at the bottom of the market for equipment. “We went to the first auction and bought all this cruddy old equipment,” Michael recalls. “Lathes that turned, mills that vibrated… We even bought a forklift that didn’t run. It was pretty rough stuff. We cut our teeth on that.” Nonetheless, the brothers had one vital asset: a solid reputation built up through their years working in the industry. Rockwell Automotive had been a customer with their previous employer, and when it found out Michael and Dale had moved on, it sought them out. “They knew we were the smarts behind what was happening there,” says Michael. “So when it started to falter because we were no longer there, they found us, and they became about 97% of our work.” Soon Amiga was making spring hangers and axel components for most of the trucks manufactured in Australia, with a client base extending to include the likes of Kenworth and Iveco. The oil & gas industry was next on board, with Amiga making flanges and fittings for the sector. After three or four years the company brought in its first CNC machine – second-hand – and in 1994 it got its first CNC milling machine. “We had to figure out how to drive it,” Michael adds. “I read books all night long, and the next day got it going. That’s how we were: here’s a machine, hardly anyone knows how to use it, figure it out!” Those early days were defined by the company’s ability to improvise solutions working with relatively limited equipment. “The clevers were in there somewhere,” Michael acknowledges. “It was really about being creative and innovative. It was quite an amazing time. We were making state-of-the-art parts on really antiquated equipment. We did that for years. We grew and grew, and finally our accountant said ‘You’ve got to get out of there, you’ve got to buy your own factory’.” In 1995, Amiga moved to its current site in Tullamarine, north of Melbourne, and the company continued to expand, with its plant today occupying 2,700sqm. Staffing levels peaked at 23 just before the GFC, after which they dropped down and have subsequently stabilised with a team of 15. Meanwhile the company has continued to broaden its customer base, providing general engineering and production CNC machining services for sectors such as oil & gas, mining, energy, medical and defence (including work on the Collins Class submarines). It also has a profitable specialism in gearboxes, developing its own product line with the acquisition of the Genat & Wood brand in 2009. One theme that stands out in Amiga’s story is the way it has been able to build strong relationships with its customers through its ability to exceed what they might have expected from any given job, delivering better solutions via technical expertise and innovative design. “That’s a nice way of putting it!” agrees Michael. “The ability to think outside the square, to look at what they needed and what they wanted, and to come up with a solution that was going to fit their need is what we’re about.” New ventures Amiga’s latest venture continues with that theme. Launched last year, Metal3D aims to offer Australia’s first privately owned turnkey service for 3D printing in metals, providing a one-stop combining both traditional manufacturing and additive processes. The company has acquired a pair of ProX 320 DMP metal 3D printers from 3D Systems/Konica Minolta, as well as a SLM 280HL machine from SLM Solutions. The company is currently working with aluminium, titanium, stainless steel and Inconel, with plans to swiftly diversify into other materials. 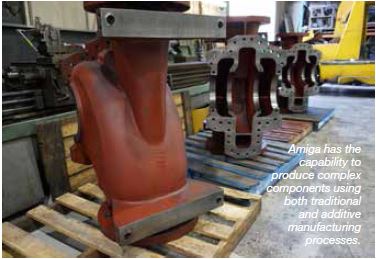 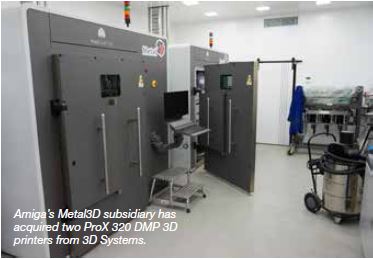 For Michael, the establishment of Metal3D came about in response to a need to find new ways to service his clients: “We got to a point where we had five-axis machining, the latest software and a good skillset, so where is the work? We needed another way to connect with our customers and potential new clients. What point of difference could we make?” However, the inspiration for the venture had a more personal basis, going back to 2011, when a lifetime of physically demanding work began to take a toll on Michael. A spinal injury was degrading to such an extent he was starting to lose the use of his left arm. Doctors told him he had a prolapsed disc that would need to be replaced, but doing so would require fusing the adjacent vertebrae. “I thought there must be something better than that,” Michael explains. “Once you start fusing something, the joints next to that start to degrade as well. So in 5-10 years time, you’re going to have another problem … and then another problem. I said to the surgeon there had to be something better.” Michael set about researching alternatives, which led him to a device called an M6-C. Replicating the structure and performance of a natural disc, it comprised a polymer-based cell that could compress to allow a full range of motion, sandwiched between two titanium plates. Those plates were 3D-printed with an intricate outer surface that would support bone integration to create a permanent fixture. “I was saved!” says Michael. “I flew to Sydney on a Wednesday night, had the operation on the Thursday, and walked out on Saturday. And I walked the steps of the Opera House. With fusion you’re basically off work for six to 10 weeks. To me, that highlighted this new technology, 3D metal printing, that was far superior to what anyone else is doing. Over the next few years I followed where it was going and what were we doing here in Australia.” Given its origins, it’s to be expected Metal3D has pursued work in medical and dental applications. Other projects have encompassed areas ranging from aerospace, defence and automotive, right through to food & beverages and jewellery design. To some extent the venture is being driven by the ideas clients bring in and the problems they need solved. “It’s growing,” says Michael. “Probably not as quick as I thought it would, but the things that have come past us in the space of 12 months have been phenomenal. It’s opened our eyes. They come along with their creative ideas, then we look at that and tailor ideas to suit, whether it needs to be machined or 3D-printed. We can make those judgement calls, or join the two together.” For Michael, this is the crucial aspect of what Metal3D can offer: the ability to combine traditional machining, which remains relatively inexpensive and reliable, with the complexity and versatility offered by 3D printing. “That’s where I see us going,” he says. “Multi-functional parts, with internal cavities that are unmachineable. You can’t machine a spiral, you can’t drill a spiral hole. Some things we can complete very well with machining and casting, and they’re still by far the best method on price. But as soon as you get complexities in there, something that’s got to perform a specific purpose, then it can’t be machined. Then 3D printing is the way. So you have a mixture of machining with 3D printing. Having that point of difference is helpful.” Bright prospects Michael is optimistic about the current state of manufacturing in Australia, seeing signs of revival after a few years in which the industry languished. Amiga has had its share of experiences of losing work to overseas competitors in low-cost countries, but now he senses the tide may be turning. “I think in a sense we’re really starting again here in Australia,” he says. “Over the years I think manufacturing’s been left to rot, wane, disappear offshore. But I think that’s turning around, we’re reinventing ourselves. We need to look at new technologies and advance them. Us getting hold of 3D printing in metal, we’re still catching up to what’s going on in Europe, in America. But we’ve got clever scientists here in Australia, we’ve got people in universities at the forefront of all sorts of technology. We’ve got the right equipment. We just need to move our thinking a little bit further forward.” For the future, Amiga isn’t slowing down or resting on its laurels. It is expanding further in the area of metal 3D printing, with the introduction of new capabilities such as heat treatment, postmachining and finishing, and the further addition of printable materials. A big focus is on testing and validation, enabling the company to meet the exacting standards of clients in high-end sectors such as defence and aerospace. “I see add-ons to what we’re doing with 3D printing,”Michael explains. “I think if we can grow our capability a bit further and create the testing regimes, that can help those sides of the businesses. We’ve got more to offer.” Meanwhile the team at Amiga is working hard at getting word out about the business and its capabilities, while promoting the potential of Additive Manufacturing. Michael serves as a member of the Advisory Committee for the Additive Manufacturing Hub, an industry-driven collaborative network established by AMTIL. Meanwhile, Amiga will soon be putting its capabilities on display within the Manufacturers Pavilion, at the Austech 2019 exhibition in Melbourne this May. “I hope we can try and showcase what we’ve been doing, showcase our point of difference,” says Michael. “We’re just a machine shop, but we’ve got the ability to take complex componentry, find solutions and solve engineering problems, and really get the creative juices of younger minds moving.” Amiga Engineering will be exhibiting at Austech 2019 in the Manufacturers’ Pavilion at stand number MS44. www.amigaeng.com.au www.metal3d.com.au AUSTRALIAN MANUFACTURING TECHNOLOGY – APRIL/MAY19
(Visited 126 times, 1 visits today)
Posted on April 9, 2019 by Leonie